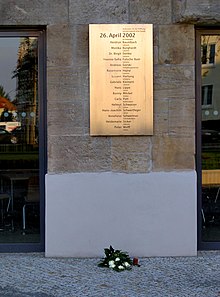 A memorial to the victims of the Erfurt massacre

The Erfurt massacre was a series of shootings that happened at the Gutenberg Gymnasium in Erfurt, Germany, on 26 April 2002.

A boy that had been expelled from the school, Robert Steinhäuser, was the person who did all the shooting. In anger, he came into the Gymnasium, and shot dead 12 teachers, one secretary, two students, and a police officer.

After a teacher caught him and put him in an empty room, Steinhäuser shot and killed himself. In total, 17 people were killed.