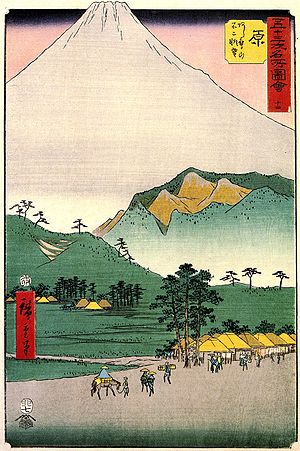 View of the extinct volcano Ashitakayama, woodblock print by Hiroshige

List of extinct volcanoes includes volcanoes which scientists consider unlikely to erupt again.[1] A volcano which has not erupted in the past 10,000 years is often listed as extinct.[2]

Volcanologists sometimes can't tell whether a volcano is extinct or dormant. A caldera that has not produced an eruption in tens of thousands of years is likely to be considered inactive.[4] Dormant volcanos may still erupt, whereas extinct ones cannot or still may have one percent chance.

There are many examples of extinct volcanoes.