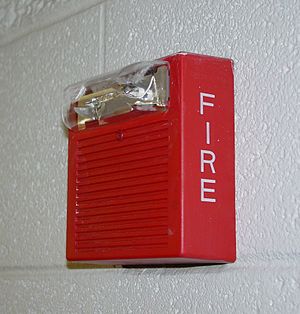 A fire alarm is a sounder. The sounders make a siren or a similar noise to let people know that there is a fire. Some companies that make fire alarms are Wheelock and Simplex. Sometimes, old-fashioned fire alarms are metal bells.

An alarm sounder is a device that will make a loud noise when the fire is discovered and the fire system set off with either a manual or an automatic system. The loud sound created will alert anyone at the building or site that there is a fire so they can escape safely. Many fire alarm systems also have flashing lights. These are important for deaf people who cannot hear the fire alarm.

Fire alarms are often used in schools and other places during fire drills. If somebody sets off a fire alarm without a good reason, it is called a false alarm. Setting off a false alarm is against the law almost everywhere.[1]