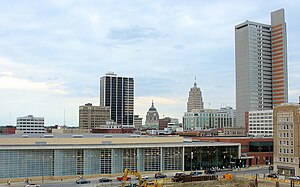 The Fort Wayne, Indiana skyline from atop the Harrison Square Parking Deck 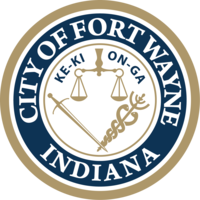 Fort Wayne is a city in the U.S. state of Indiana and the county seat of Allen County.[1] The population was 254,555[2] as of the 2012 Census estimate making it the 74th largest city in the United States and the second largest in Indiana after Indianapolis. The city is in northeastern Indiana, about 18 miles (29 km) west of the Ohio border[3] and 50 miles (80 km) south of the Michigan border.[4]

Under the direction of American Revolutionary War statesman Anthony Wayne, the United States Army built Fort Wayne. It was the last in a series of forts near the Miami tribe village of Kekionga in 1794.[5] Named in Wayne's honor, the settlement established itself as a trading post for European pioneers.[6]

Fort Wayne was known for hosting the first ever nighttime baseball game.[7] In 1982, there was flood that forced 9,000 residents to leave their homes. It damaged 2,000 buildings and caused US$56.1 million in damage. Because of this, President Ronald Reagan visited the city.