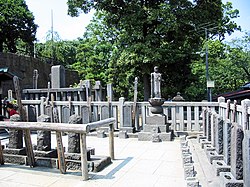 Graves of the Forty-seven Ronin at Sengaku-ji.

The revenge of the Forty-seven Ronin took place in Japan at the start of the 18th century. It describes a historical event, but there is a lot of fiction added to the story too.

The story tells of a group of samurai who were left leaderless (becoming ronin) after their daimyo (lord) Asano Naganori had to kill himself by committing seppuku (ritual suicide). He had to do this because he assaulted a court official named Kira Yoshinaka. The ronin waited and planned almost two years, and then killed Kira to avenge their master's honour. They delivered Kira's head to Asano's grave. After that, the ronin had to kill themselves by committing seppuku as they had committed the crime of murder.

One noted Japanese scholar described the tale, the most famous example of the samurai code of honor, bushidō, as the country's "national legend."[1]