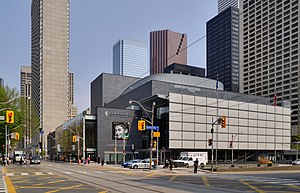 The Four Seasons Centre for the Performing Arts is an opera house in Toronto, Canada. It was opened on June 14, 2006. It is home to the Canadian Opera Company and the National Ballet of Canada. It is one of the world's most important opera houses. It was designed by Jack Diamond. Its construction uses a lot of new technological ideas. It is in the center of Toronto. People say that the acoustics are excellent (the music can be heard beautifully everywhere in the hall). The subway (underground train) runs just below the building, but inside the trains cannot be heard.