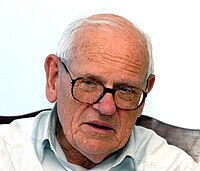 François Houtart (7 March 1925 – 6 June 2017) was a Belgian marxist sociologist and Catholic priest. He was born in Brussels, Belgium. He participated as a peritus expert in the sessions of Vatican II (1962–1965) playing a key role in the formation of the introduction of the Gaudium et spes. Over the years, Houtart developed a dialectical approach to the study of world religions. He was a professor at the Université catholique de Louvain.

In 2009, Houtart was awarded the UNESCO-Madanjeet Singh Prize for the Promotion of Tolerance and Non-Violence "for his lifelong commitment to world peace, intercultural dialogue, human rights and the promotion of tolerance, and in recognition of his outstanding efforts to advance the cause of social justice in the world."[2][3]