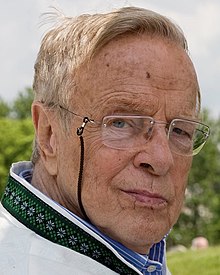 Franco Zeffirelli, KBE (12 February 1923 – 15 June 2019) was an Italian director and producer of movies and television. He was also a opera director and designer of Italian operas.

He was a former senator of Catania (1994–2001). His political party was the Forza Italia party.

He received an honorary knighthood from the British government in 2004 when he was created a Knight Commander of the Order of the British Empire.[1]