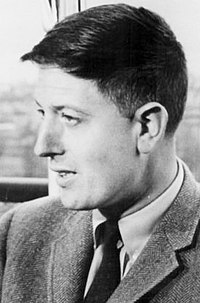 Frank Buxton (February 13, 1930 – January 2, 2018) was an American actor, television writer, author, and television director. He was born in Wellesley, Massachusetts.[1]

In 1966, Buxton teamed up with Hal Seeger in the animated cartoon series Batfink. He also hosted the game show Get the Message for ABC in 1964. He also had movie roles in What's Up, Tiger Lily? and Overboard.

For the 1970s, Buxton worked as a writer, producer and director for Paramount Television. He served as a story editor for the comedy anthology series Love, American Style, in addition to writing and directing episodes of The Odd Couple, Happy Days and Mork & Mindy.

Buxton died at his home in Bainbridge Island, Washington of complications from heart disease on January 2, 2018 at the age of 87.[2]