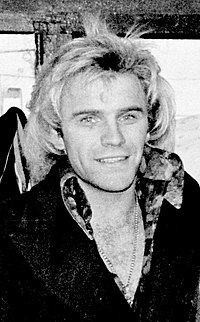 Frederick Leslie Fowell (9 January 1943 – 9 May 2019), better known by his stage name Freddie Starr, was an English comedian, singer and actor. He was the lead singer of the Merseybeat group the Midnighters (also spelled "Midniters") during the 1960s. He also appeared on TV shows such as Opportunity Knocks and Royal Variety Performance. In the 1990s, he starred in many shows such as Freddie Starr (1993–94), The Freddie Starr Show (1996–98) and An Audience with Freddie Starr (1996).

Starr is also well-known for being the subject of a headline by The Sun in 1986. The tabloid's headline, "Freddie Starr ate my hamster", became one of the UK's most known headlines.[1]

Starr was born in Huyton, Lancashire. He was investigated by police as part of the Operation Yewtree sex crimes. He was never charged.