People can eat the stem and roots. It looks very similar to some poisonous species (Conium, Heracleum, and others). Because of this it is important to know for certain it is garden angelica before eating it.

During its first year it only grows leaves. The flowers blossom in July. There are many small flowers that are yellowish or greenish in colour.

It grows wild in Finland, Sweden, Norway, Denmark, Greenland, the Faroe Islands and Iceland, mostly in the northern parts of the countries.

From the 10th century on, angelica was grown as a vegetable and medicinal plant.[1] It is used to flavour liqueurs or aquavits, omelettes, trout and jam. The long bright green stems are also candied and used as decoration. 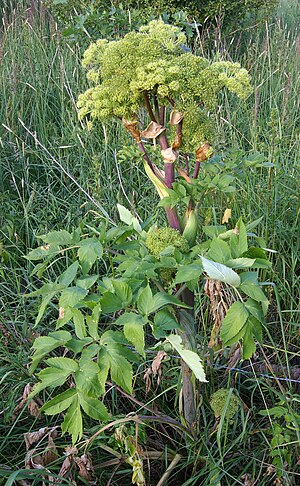