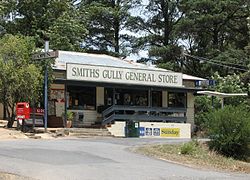 A general store, (also called a 'general merchandise store', 'general dealer' or 'village shop') is a rural or small town store that carries a very general selection of merchandise.[1] The store is often a small space. It is where people from the town and surrounding rural areas come to purchase staple food items such as milk and bread. Also the various other goods, dry goods and hardware homes and farms might need. It sometimes served as a village or town meeting place where neighbors exchanged news and gossip. The concept of the general store is very old, and although some still exist, there are far fewer than there once were, due to urbanization, urban sprawl, and the relatively recent phenomenon of big-box stores.