View of the west coast of Gili Meno looking south — Lombok is in the distance. 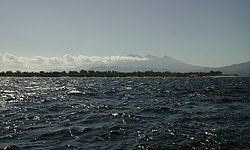 Gili Meno is an island in Indonesia. It is the middle of Lombok's three Gilis. It has population of about 300, mainly concentrated on the center of the island. The main income of the population comes from tourism, coconut plantation, and fishing. On the west side of the island there is a small shallow lake that produces salt in the dry season. Until a few years ago there was also a small production of seaweed on the reef at the north end of the island. It has swimming beaches all around the island, as well as an impressive bird sanctuary.