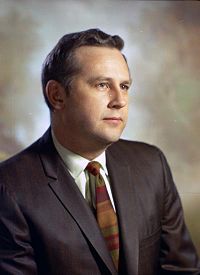 Gordon Lee Walgren (March 7, 1933 – March 13, 2018) was an American politician and lawyer. He was born in Bremerton, Washington. He was a member of the Democratic Party.

Walgren was appointed to the Washington House of Representatives in November 1966 and served the remaining term in 1966.[1] Walgren served in the Washington State Senator from 1967 to 1980, and was Senate Majority Leader from 1975 onward.[2]

Walgren was convicted of mail fraud, racketeering, and violations of the Travel Act.[3] Two of the three counts - mail fraud and racketeering - were later overturned.[4]