A statue of Miguel Hidalgo y Costilla in front of the church in Dolores Hidalgo, Guanajuato.

The Grito de Dolores ("Cry of Dolores") was the call issued by Father Miguel Hidalgo y Costilla, a Catholic priest, on 16 September, 1810 in the small town of Dolores (Therefore the Grito "de Dolores"). It is also called the Grito de la Independencia or the Cry of Independence against the traditional Spanish Government, which had become catastrophically distorted by the Napoleonic invasion of the Peninsula in the preceding two years.

Hidalgo and a number of criollos were planning to fight the Spanish colonial government, but they were betrayed.

Because he was afraid to get arrested,[1] Hidalgo made his brother Mauricio and a number of other men with guns go to the sheriff. On the night of 15 September, they made the sheriff set free the pro-independence (people wanting to rule their own land) prisoners. They set eighty free.[2]

The next morning, at around 6:00 am, Hidalgo ordered the church bells to be rung. He made his congregation (people who attended his church) come together. With Ignacio Allende and Juan Aldama by his side, he spoke to the people in front of his church. He encouraged them to go against José de Iturrigaray the Spanish Viceroy. Researchers do not agree as to what exactly Hidalgo said at the time.[3]

The Battle of Guanajuato, the first important fight in the war, happened 4 days later. Mexico's independence from Spain wouldn't be declared until September 27, 1821, after ten years of war. This happened with the declaration of the first Mexican Empire. 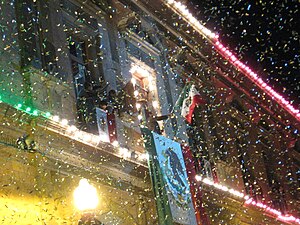 Municipal president giving the "grito" of "¡Viva México!" at the start of Independence Day festivities at 11 pm 15 Sept 2008 in Ixmiquilpan, Hidalgo.

Every year on the night of September 15 the President of Mexico rings the bell of the National Palace in Mexico City at around eleven in the evening. After the ringing of the bell, he repeats a cry of patriotism (a Grito Mexicano) based upon the "Grito de Dolores". He calls out the names of the important heroes of the Mexican War of Independence and ends with the shout of Viva Mexico! (three times) from the balcony of the palace. After the shouting, he rings the bell again and waves the Flag of Mexico to the applause of the crowd in the Plaza de la Constitución. This is followed by the playing and mass singing of the Himno Nacional Mexicano, the national anthem. On the morning of September 16, or Independence Day, the national military parade starts in the Zócalo (another name for the Plaza de la Constitución). It goes past the Hidalgo Memorial and ends on the Paseo de la Reforma, Mexico City’s main boulevard.

A similar celebration happens in cities and towns all over Mexico, and in Mexican embassies and consulates worldwide, on the 15th or the 16th. The mayor or governor, ambassadors or consuls will take on the role of the president, and ring the bells, give a speech and so on.

In the 19th century, Mexican presidents in their last year in office started to come to Dolores Hidalgo for the Grito de Dolores. President Calderón went to Dolores Hidalgo as part of the bicentennial celebrations in 2010 on the 16th of September.[4][5]

September 16 is Independence Day in Mexico and is considered a patriotic holiday, or fiesta patria (literally, holiday of the Fatherland). This day is celebrated with parades, patriotic programs, drum and bugle and marching band competitions, and other special events.