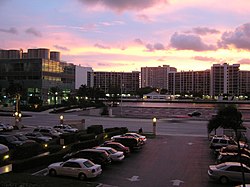 A picture of Hallandale Beach at sunset.

Hallandale Beach is a city in Broward County, Florida, United States. The city is named after Luther Halland, a worker for Henry Flagler's Florida East Coast Railroad. The population was 37,282 at the 2000 census. Sometimes the city is called the "southernmost Canadian city". This is because Hallandale Beach has been a popular vacation spot for years, and most of the tourists come from Quebec and the northeast United States. Many of these tourists eventually moved to the area to live there.