KidzSearch Safe Wikipedia for Kids.
Jump to: navigation, search
(For the different sport of the same name played with two, three or four players, see.) 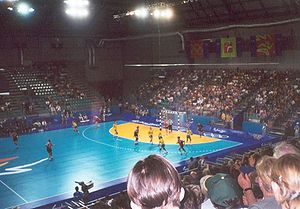 Handball (also known as team handball, field handball or Olympic handball) is a team sport similar to football (soccer). Two teams of 7 players each (six players and a goalkeeper) pass and bounce a ball using the hands, trying to throw it into the goal of the other team. Games are an hour of playing time, divided into 30-minute halves, with 15 minutes break at halftime. The size of the court is a little bigger than a basketball court, 40 meters by 20 meters, which is the same court as indoor soccer. It has a six-meter line which no one but the goalie is allowed to have possession of the ball and touching the ground. If this happens, a foul is called and the player committing the foul gets ejected, (sitting out of the game for two minutes, five minutes, or the rest of the game). There are seven players total on a handball team, six players and a goalie. Most historians agree that handball predates soccer, (football) but that is not for certain