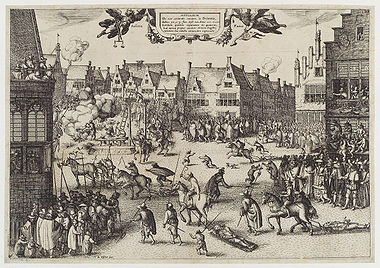 Seventeenth century print of the execution, by hanging, drawing, and quartering of the members of the Gunpowder plot

Hanged, drawn and quartered was a punishment. In England, it was used for high treason.

Until reformed under the Treason Act 1814, the full punishment for the crime of treason was to be hanged, drawn and quartered in that the condemned prisoner would be:

Typically, the resulting five parts (i.e. the four quarters of the body and the head) were gibbeted (put on public display) in different parts of the city, town, or, in famous cases, in the country, to deter would-be traitors who had not seen the execution. After 1814, the convict would be hanged until dead and the mutilation would be performed post-mortem. Gibbeting was later abolished in England in 1843, while drawing and quartering was abolished in 1870.

There is debate among modern historians about whether "drawing" referred to the dragging to the place of execution or the disembowelling, but since two different words are used in the official documents detailing the trial of William Wallace ("detrahatur" for drawing as a method of transport, and "devaletur" for disembowelment), there is no doubt that the subjects of the punishment were disembowelled.[4]

Judges delivering sentence at the Old Bailey also seemed to have had some confusion over the term "drawn", and some sentences are summarized as "Drawn, Hanged and Quartered". Nevertheless, the sentence was often recorded quite explicitly. For example, the record of the trial of Thomas Wallcot, John Rouse, William Hone and William Blake for offences against the king, on 12 July 1683 concludes as follows:

Then Sentence was passed, as followeth, viz. That they should return to the place from whence they came, from thence be drawn to the Common place of Execution upon Hurdles, and there to be Hanged by the Necks, then cut down alive, their Privy-Members cut off, and Bowels taken out to be burned before their Faces, their Heads to be severed from their Bodies, and their Bodies divided into four parts, to be disposed of as the King should think fit.[5]

The Oxford English Dictionary notes both meanings of drawn: "To draw out the viscera or the like, to the place of execution". It states that "In many cases of executions it is uncertain [which of these senses of drawn] is meant. The presumption is that where drawn is mentioned after hanged, the sense is [the second meaning]."[6]

The condemned man would usually be sentenced to the short drop method of hanging, so that the neck would not break. The man was usually dragged alive to the quartering table, although in some cases men were brought to the table dead or unconscious. A splash of water was usually employed to wake the man if unconscious, then he was laid down on the table. A large cut was made in the gut after removing the genitalia, and the intestines would be spooled out on a device that resembled a dough roller. Each piece of organ would be burned before the sufferer's eyes, and when he was completely disembowelled, his head would be cut off. The body would then be cut into four pieces, and the king would decide where they were to be displayed. Usually the head was sent to the Tower of London and, as in the case of William Wallace, the other four pieces were sent to different parts of the country. The head was generally par-boiled in brine to preserve the appearance of the head in display, while the quarters were more often prepared in pitch, for longer-lasting deterrent displays.