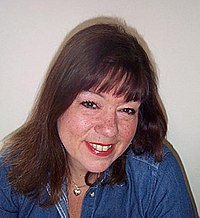 Heather Anita Couper (2 June 1949 – 19 February 2020) was a British astronomer, broadcaster and science populariser. She served as president of the British Astronomical Association from 1984 to 1986.

Couper was born in Wallasey, Cheshire. She studied astrophysics at the University of Leicester and researched clusters of galaxies at the University of Oxford. After this, she was named senior planetarium lecturer at the Royal Observatory, Greenwich. She also hosted two TV series on Channel 4, The Planets and The Stars. On radio, she presented the award-winning programme Britain's Space Race as well as the 30-part series Cosmic Quest for BBC Radio 4. She served on the Millennium Commission, for which she was named a CBE in 2007. Asteroid 3922 Heather is named in her honour.