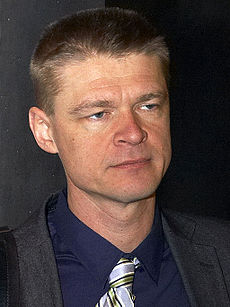 Henrik Pontén (17 October 1965 – 15 May 2020[1]) was a Swedish jurist. He was born in Kalmar, Sweden. He worked for the organization Svenska antipiratbyrån (Swedish Anti-Piracy Bureau), and was often seen representing the organization in the media.[2]

He became well known in Swedish media during the Bahnhof raid and the raid against The Pirate Bay. Pontén studied law at Stockholm University.

In May 2009, a fake application with the Swedish Tax Agency was submitted to change his name to "Pirate Pontén".[3]