Hercules and Xena - The Animated Movie: The Battle for Mount Olympus

Hercules and Xena - The Animated Movie: The Battle for Mount Olympus is a 1998 animated action adventure movie starring the voices of Kevin Sorbo, Lucy Lawless, Michael Hurst, Renée O'Connor and Kevin Smith, all reprising their roles from Hercules: The Legendary Journeys and Xena: Warrior Princess. 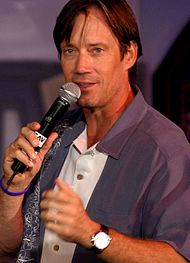 The movie starts with the Sirens singing Across The Sea of Time which is about how Zeus took the cronus stone from the titans and had a fling with Alcmene and had a son named Hercules, who defeated a hydra at an early age and became a hero. As they finish, a giant sea serpent comes from the sea and Hercules is trying to kill it. He finally throws a giant rock in its mouth but it jumps on the shore and lands on top of Hercules. It cant live on land so it dies and Hercules climbs out of its nosteral. The villagers thank Herc and Iolaus climbs out of a restchair and joins Hercules, who gets a big fish as a gift from the villagers. Herc and Iolaus head to Thebes to see Alcmene but Iolaus is a little upset because Herc gets all the credit. However the two defeat several highway men and alls okay. Saytars are in a bar and stole gold from helples people thus Xena and Gabrielle show up to beat them up and take the money back. Ares shows up after Gabrielle throws wine at a saytar and be ats him up with her fighting stick. He tells Xena to stop Herc from going to Thebes because there's a trap set for him there. Xena wants Herc to go since there's trouble and he needs to help. She is mad because Ares never gives up and wants her. She and Gabrielle argue about his intentions a little but are not enemys or nothings. Theres No rift between them in this movie.

Hercules is acting like a horse and pulling an old style plough at his mom's house. Iolaus is tired but they see Zeus come from the heavens in his chariot winged horses like Pegasus driving the chariot down. He takes Alcmene to Mt Olympus and Hercules's pissed. Iolaus thinks Alcmene went on her own since she put up no fight but Herc disagrees and pushes Iolaus against a wall in his anger. Hercules says sorry and the two head to rescue Alcmene. Zeus talks to Ares and wonders why he did not stop Hercules. He says he tried to get a mortal named Xena to do it and Zeus is mad because Ares keeps wanting Xena. Hera shows up, Hera is an old woman with a bad attitude face and nasty voice and attitude, and yells at Zeus about bringing Alcmene here. She leaves and somehow steals the cronus stone in the moment, the stone that keeps the titans in the underworld lava pits. Hera summons the titans out while Zeus checks on Alcmene, whos been shrunk and placed in a small Arabian doll house castle for safety from Hera. Aphrodite surfs down a mountain and makes Iolaus very happy and hugs her bro Hercules. She tells Herc that Heras mad and not to go to Mt Olympus for his own good but he decides to go and Iolaus stays behind to entertain the goddess of love but she leaves when an earthquake starts. But its a small boy who falls into the lava pits. Hercules holds the colliding ends together and Iolaus pulls up the boy making both heroes. The mother takes her son as Xena and Gabrielle, in a nearby town, battle 3 thugs who they beat easily and Xena must stop a rolling giant rock from destroying the fat thug. As she is successful, they show Hercules meeting the titan Porphyion. The leader titan says Herc can go free because he is not defending the gods. Zeus calls Artemis, Aphrodite, and Ares together to fight The Titans and they hope Hercules helps them. Xena and Gabrielle are helping wounded people and Artemis decides to get Xenas help and turns Gabrielle into a giant bird. Xena flys on Gabrielle to The Gods home while Herc climbs up. Artemis says she turned Gabrielle to get Xenas help and Xena said that all she had to do was ask for help from Xena. The titans come and fight. There four big titans-Poprhyrion, Tethys, Crius, and Mnemosyne. Hercules shows up and says hi to Xena but rescues Alcmene and leaves everyone to fight the titans. Hera turns the gods into animal after. Iolaus and Xena escape via bird Gabrielle to Alcmenes house. Everyone's upset because Herc did nothing to help Alcmene. The gods are all small animals until Zeus can get the stone back. Ares is a goat, Aphrodite is a cow, Artemis is a rabbit, and Zeus is a mouse. Herc finds out that Alcmene was sick and Zeus offered to make up for hardtimes by giving her immortality and taking her to live with him on Mt Olympus. Hercules is still mad at Zeus

The titans sing a stupid song and its back to earth where Xena sings something and both her and Hercules makeup and agree to help the gods get there home and stone back. The Titans get the stone from Hera and turn her into a small doll and place her in the dollhouse. Alcmene by the way has been turned back intoa normal person. The heroes ride Gabrielle to the mountain and fight the Titans. Herc gets the stone and tears it apart and thus the underworld caverns open and the lava pits are displayed. Hercules and Xena flip the fat titan Crius into the lave and Iolaus gets the water and fire females titans to collide and dissolve into the fiery pits. Gabrielle scoops up Porphy-rion who grabbed Hercules. Hercules managed to reach Gabrielles back where Xena and Iolaus are sitting and Gabrielle the bird drops the titan into the cavern, catches a falling Hercules, and drops him off on the gods mountain in time to close the stone which locks the titans in there prison of lava. Zeus and Alcmene go back to Olympus and Zeus welcomes Hercules to visit. Herc than heads of with Iolaus, Gabrielle, and Xena to Corinth to return a bag of gold and seek another adventure.

The songs "Across the Sea of Time", "Titans Song", and "Xena's Song" were written by Michele Brourman and Amanda McBroom.