Human trafficking: Countries of origin are shown in red, destination countries are shown in blue; Data is from the UN, in 2006 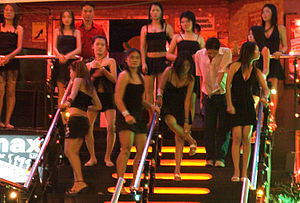 Prostitutes in front of a bar, in Thailand: : Like slaves on an auction block waiting to be selected, victims of human trafficking have to do what they are told, or they will be beaten.

Human trafficking (or Trafficking in human beings) is a way to exploit people. People are sold, bought, traded much like slaves , and are even sold to couples who don't have children. It is estimated to be a $5 to $9 billion-a-year industry.[1] Trafficking victims typically are recruited by using force or because they are deceived, or fraud is used, power is abused, or they are simply abducted. Threats, violence, and economic problems can often make a victim consent to exploitation.

Human trafficking should not be confused with human smuggling.[2][3][4]

Exploitation includes forcing people into prostitution or other forms of sexual exploitation, forced labour or services, slavery or practices similar to slavery, servitude or the removal of organs. For children exploitation may also include forced prostitution, illegal international adoption, trafficking for early marriage, or recruitment as child soldiers, beggars, for sports (such as child camel jockeys or football players), or for religious cults.[5]

The norms based on international human rights law, such as Vienna Declaration[6] and the Yogyakarta Principles[7] prohibit human trafficking and Council of Europe and Charter of Fundamental Rights of European Union also prohibit them and do effort to save the victims.

Child trafficking is defined as the "recruitment, transportation, transfer, harboring, and/or receipt" of a child for the purpose of exploitation.[8] The commercial sexual exploitation of children can take many forms. This includes forcing a child into Child prostitution.[9] Or it can be other forms of sexual activity like child pornography. exploitation may also involve forced labour or services like slavery. It can mean practices similar to slavery such as servitude or the removal of organs, illegal adoption, or recruitment as child soldiers.[10]