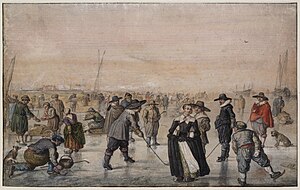 Ice skating probably began in Scandinavia as early as 1000 BCE, as a way to travel in the winter. The sport of skating started in the Netherlands. Since the Middle Ages, people in the Netherlands have skated on canals. The first skating club was created in Scotland in 1742. In 1850, Edward Bushnell created steel-bladed skates which allowed skaters to make difficult turns and movements on the ice.[2] Figure skating was included in the Olympics in 1908. It was the first winter sport included in the Olympics. Today, ice skating is a popular pastime. Ice shows, like Ice Follies and Ice Capades, are a popular form of entertainment.[3]

Men's singles, women's singles, pairs and ice dance are the four types of competitive figure skating. In singles competitions, skaters perform a short technical routine and a longer, creative free routine. The skaters are judged on their performance of jumps, spins and spirals, as well as their artistry. In pairs competitions, two skaters perform two original routines together and are judged on their skills, artistry, and synchronization. In ice dancing, two skaters perform two compulsory routines and an original routine together.[3]

Speed skating is racing on ice. Skaters are judged on their speed. Speed skating has been an Olympic sport since 1924.[4]