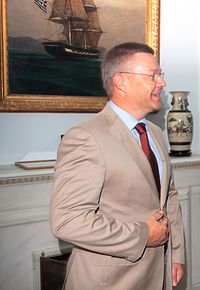 Ilkka Pertti Juhani Laitinen (22 August 1962 – 29 September 2019) was a Finnish military officer and poilitician. He was the lieutenant general and the Chief of the Finnish Border Guard from 2018 to 2019. He was the first Executive Director of Frontex, the European Union’s border protection agency, from 2004 until 2014. He was born in Nurmes, Finland.