Imprinting keeps the family together 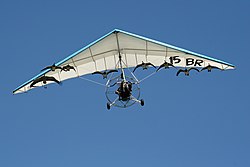 Imprinted geese and cranes flying with an ultralight aircraft

Imprinting is a term used in ethology and psychology to describe a special type of automatic learning.

It usually occurs early in life, during a critical period. That is why the textbooks call it phase-sensitive learning. It is learning which happens at a particular age or a particular life stage. The animal fixes on a particular signal (sound or sight), which is said to be 'imprinted' onto the subject. The process of imprinting is caused by an inherited instinct.

The best-known form of imprinting is the imprinting of the newly-hatched (or born) on one or both parent. Its function is to keep the young near their parent(s) during the early learning period. It is most obvious in birds, such as ducks and geese, after the fledglings have left the nest. They imprint on their parents and then follow them around, often in a long line, on land and on water.

It was first reported in domestic chickens, by the 19th-century amateur biologist Douglas Spalding. It was rediscovered by the early ethologist Oskar Heinroth, and studied extensively and popularised by his disciple Konrad Lorenz, and by Niko Tinbergen.[1]

Lorenz showed how incubator-hatched geese would imprint on the first suitable moving stimulus they saw within what a 'critical period' of 13–16 hours after hatching. For example, the goslings would imprint on Lorenz himself (to be more specific, on his wading boots). He is often shown in photographs being followed by a gaggle of geese who had imprinted on him.[2]

In child development, the term is used to refer to the process by which a baby learns who its mother and father are. The process is recognised as beginning in the womb, when the unborn baby starts to recognise its parents' voices.[3]

The filial imprinting of birds was a primary technique used to create the movie Winged Migration (Le Peuple Migrateur), which contains footage of migratory birds in flight. The birds imprinted on handlers, who wore yellow jackets and honked horns constantly. The birds were then trained to fly along with a variety of aircraft, usually ultralights.