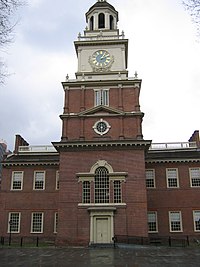 Independence Hall is a historic building in Philadelphia, Pennsylvania. It is called Independence Hall because the Declaration of Independence was passed there. The United States Constitution was also written there. It served as the capital of the United States several times, mostly during the Revolutionary War. It was also the meeting place of the state legislature of Pennsylvania. It is a World Heritage Site. It is on the back of the $100 bill.

The Liberty Bell was originally in the bell tower of the building.

Rooms on the First Floor 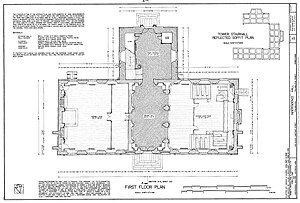 Rooms on the Second Floor

This short article about a place or feature in the United States can be made longer.

Help Improve This Page: Please contact us to become an approved KidzSearch editor and provide your credentials. Provide feedback on this article in our Independence Hall Forum