Inequality is sometimes used to name a statement that one expression is smaller, greater, not smaller or not greater than the other.

Solving inequality is finding a solution to a given variable. It is finding a relative order of a set. Inequality might have many solutions, but usually only solutions as real numbers are the ones we are looking for. The proper way to read inequality is from left to right, just like the other equations, but the only difference is that they have different rules for every equation.

For example, consider the inequality x+4>12, where x is a real number. First, one needs to find the x and verify that it is actually a solution. The answer will be x>8 and it is a true statement. This expression is about the location of x within the set of real numbers. A number line is one way to show the location relative to all other real numbers.[3](See figure Inequality 1)

There are five different kinds of inequalities:

An example of adding inequalities.

There are four ways to solve quadratic equations:

Examples of how to solve Inequalities 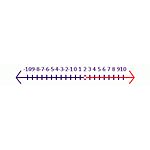 Inequality 2 Solution for the equation -6y<-12

Inequality is a mathematical statement that explains that the two values are not equal and are different. The equation a≠b means that a is not equal to b. Inequality is the same with any equation, with the (only) difference that inequality does not use an equal sign but inequality symbols. The inequality b>a means that b is greater than a. Speed limits, mark, and others use inequality to express them.

For example, start with a true statement -6y<-12. When both sides are divided by -6, the result will become y<2. In this statement, the symbol need to be reversed in order to have a true statement, which produces y>2 as the correct answer. In the number line (see figure Inequality 2), a closed shaded circle points out that it is included in the solution set. An open circle points out that it is not included in the solution set.[7]