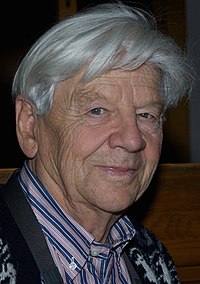 Irenäus Eibl-Eibesfeldt (15 June 1928 – 2 June 2018) was an Austrian ethologist. He was the founder of the field of human ethology.[1] In authoring the book which bears that title, he applied ethology to humans by studying them in a perspective more common to volumes studying animal behavior. He was born in Vienna.

In 1970 he became Professor for Zoology at the University of Munich. From 1975 to 2018, he was the head of the Max Planck Institute for Behavioral Physiology, Department of Human Ethology in Andechs, Germany. He was the co-founder and first president of the International Society for Human Ethology.

From 1992 until his death, he was Honorary Director of the Ludwig-Boltzmann-Institute for Urban Ethology in Vienna.

For many years he dived with Hans Hass on his diving boat Xarifa.[2]