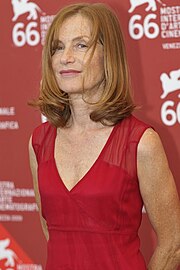 Isabelle Anne Madeleine Huppert (born March 16, 1953) is a French actress. She is known for her roles in Violette Nozière, La pianist, and in Amour.

Huppert was born on March 16, 1953 in Paris, France.[1] She as raised in Ville-d'Avray. Huppert studied at National Conservatory of Dramatic Art of Paris. She was married to Ronald Chammah since 1982. They had three children.