KidzSearch Safe Wikipedia for Kids.
Jump to: navigation, search
Jake Delhomme is an American Football quarterback for the Houston Texans of the NFL. He played college football for the University of Southwest Louisiana. Delhomme spent most of his NFL career with the Carolina Panthers after bouncing around to and from different teams from different leagues. He became a Pro Bowler in 2005. 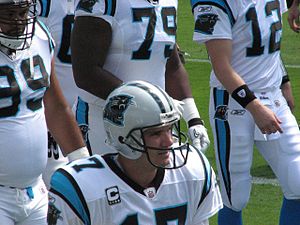 Delhomme with the Panthers in 2008
Delhomme had trouble with turnovers in his later days with Carolinia. He was signed by the Cleveland Browns in 2010, and threw only two touchdowns next to seven interceptions. Delhomme was signed by the Houston Texans in 2011 after injuries to quarterbacks Matt Schaub and TJ. Yates.

Help Improve This Page: Please contact us to become an approved KidzSearch editor and provide your credentials. Provide feedback on this article in our Jake Delhomme Forum