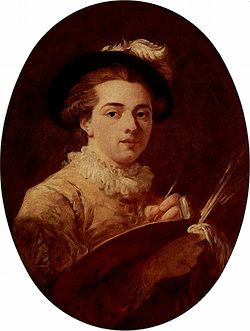 Jean-Honoré Fragonard (5 April 1732 in Grasse - 22 August 1806 in Paris) was a French artist. He is remembered as one of the most important French painters of the rococo style. He was a pupil of François Boucher, and developed Boucher's style further. At first he did historical paintings, but soon gave up on these. His works include The Swing, A Young Girl Reading, and The Secret Meeting.[1] Together with Boucher and Antoine Watteau, he is one of the principal painters of French Rococo. He lost his wealth during the French Revolution. After the revolution, the painting style was different, because he had trouble adapting, he died a poor man.