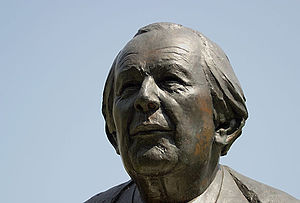 Part of a statue of Piaget, in a park, in Geneva 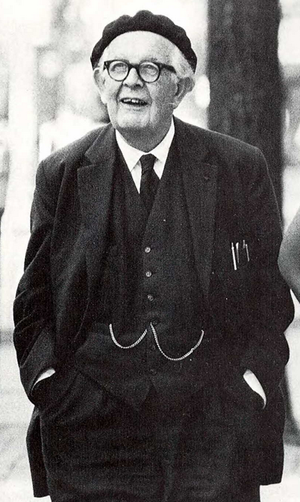 Jean Piaget (9 August 1896 - 16 September 1980) was a Swiss developmental psychologist. He is famous for his work with children and how they learn. He started a type of study called "genetic epistemology", which is about where knowledge comes from.

At first, Piaget was a biologist. He was especially interested in mollusks.[1] He became more interested in psychology while listening to children talk.[2] He wondered how they learned, and came up with a theory that they go through stages where they become ready for certain kinds of learning. These stages are called "stages of cognitive development". For example, the first stage he came up with is called the "sensorimotor stage". He believed that, from birth to two years old, children would learn that they are different from objects, and that even if the child left a room, things that were in the room would still be there. (This is called "object permanence").