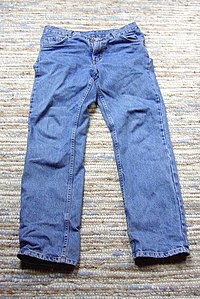 A pair of jeans

Jeans are a type of pants made from heavy, strong cotton material (fabric) called denim. They were invented in the United States by Levi Strauss in 1872. In the late 1800s, jeans were worn by workers. Jeans are one of the most obvious symbols of American cultural influence in the world. They are worn in many countries around the world.

The word "jeans" came from the French name of the city in Italy where a strong cotton fabric was made. The Italian city's name, Genoa, was spelled "jene" in Middle English and "Gênes" in the French language.[1]