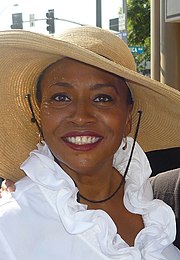 Jenifer Jeanette Lewis (born January 25, 1957) is an American movie, voice, stage, television actress and singer. She is known for her role as Flo in the Disney-Pixar movies Cars and Cars 2. Lewis was born in Kinloch, Missouri on January 25, 1957.[1] She studied at Kinloch High School and at Webster University.