A pencil sketch of himself

The Lock at Dedham, a landscape by Constable.

His family had plenty of money because his father owned a business running corn mills. Constable's father wanted his son to take over the business after him, but Constable started painting at an early age, and convinced his father to let him follow art as a career.

He married Maria Bicknell in 1816, and they had seven children. She died in 1829 of tuberculosis.

His paintings are treasures of British art, but in his lifetime his work was appreciated more in France. Constable's most famous painting, The Hay Wain (now in the National Gallery in London), was first shown at the Paris Salon in 1824. He had to wait until he was 52 years old before the Royal Academy voted that he should be a member.

Constable was influenced by the French painter Claude Lorrain. His most famous paintings are landscapes showing the countryside around Dedham and Flatford, where his father's mills were.

Constable's idea was to use nature itself, rather than imagination. He told Leslie, "When I sit down to make a sketch from nature, the first thing I try to do is to forget that I have ever seen a picture".[1]p51

Although Constable produced paintings throughout his life for the market of patrons and R.A. exhibitions, on-the-spot studies were essential. He never just followed a formula. "The world is wide", he wrote, "no two days are alike, nor even two hours; neither were there ever two leaves of a tree alike since the creation of all the world; and the genuine productions of art, like those of nature, are all distinct from each other".[2]p64

Constable painted many full-scale preliminary sketches of his landscapes in order to test the composition in advance of finished pictures. These large sketches, with their free and vigorous brushwork, were revolutionary at the time. The sketches for The Leaping Horse and The Hay Wain study convey a vigour missing from his finished oil paintings of the same subjects. Compare the composition of this preliminary study with the finished painting: The Hay Wain final. Possibly more than any other aspect of Constable's work, the oil sketches reveal him to be an avant-garde painter, one who showed that landscape painting could be taken in a totally new direction.

Constable's watercolours were also remarkably free for their time. The almost mystical Stonehenge, 1835, with its double rainbow, is often considered to be one of the greatest watercolours ever painted.[2] When he exhibited it in 1836, Constable appended a text to the title: "The mysterious monument of Stonehenge, standing remote on a bare and boundless heath, as much unconnected with the events of past ages as it is with the uses of the present, carries you back beyond all historical records into the obscurity of a totally unknown period".[2]p89

One of his sky studies 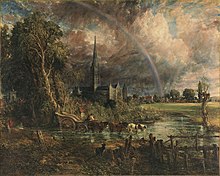 Salisbury Cathedral from the Meadows

In addition to the full-scale oil sketches, Constable completed numerous studies of landscapes and clouds, to become more scientific in his recording of atmospheric conditions. The Chain Pier, 1827, for example, prompted a critic to write: "the atmosphere possesses a characteristic humidity about it, that almost imparts the wish for an umbrella".[2]p9

The sketches were the first ever done in oils directly from the subject in the open air. To convey the effects of light and movement, Constable used broken brushstrokes, often in small touches, which he worked over lighter passages. This gave an impression of sparkling light over the landscape. One of the most expressionistic and powerful of all his studies is Seascape Study with Rain Cloud, painted in around 1824 at Brighton, which captures with slashing dark brushstrokes an exploding shower at sea.[1]p128 Constable also became interested in painting rainbow effects, for example in Salisbury Cathedral from the Meadows, 1831, and in Cottage at East Bergholt, 1833.

To the sky studies he added notes, often on the back of the sketches, of the prevailing weather conditions, direction of light, and time of day, believing that the sky was "the key note, the standard of scale, and the chief organ of sentiment" in a landscape painting.[2]p110 In this habit he is known to have been influenced by the pioneering work of the meteorologist Luke Howard on the classification of clouds.[1]p68 "I have done a good deal of skying", Constable wrote to Fisher on 23 October 1821.[1]p56

Constable once wrote in a letter to Leslie, "My limited and abstracted art is to be found under every hedge, and in every lane, and therefore nobody thinks it worth picking up".[2]p129 He could never have imagined how influential his honest techniques would turn out to be. Constable's art inspired not only contemporaries like Géricault and Delacroix, but the Barbizon School, and the French impressionists of the late nineteenth century.