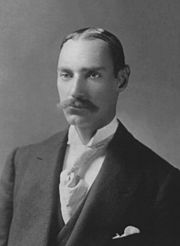 John Jacob Astor IV (July 13, 1864 – April 15, 1912) was an American businessman, real estate builder, investor, inventor, and writer. He was a lieutenant colonel in the Spanish-American War.

Astor was born on July 13, 1864 in Rhinebeck, New York.[1] He studied at Harvard University. Astor was married to Ava Lowle Willing from 1891 until they divorced in 1909. He was later married to Madeleine Talmage Force from 1911 until his death in 1912. He had two children with Willing and one before his death with Force. Astor died on April 15, 1912 during the sinking of the Titanic. He was 47 years old.

In James Cameron's Titanic, he is played by actor Eric Braeden.