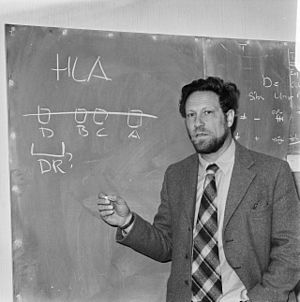 Johannes Joseph "Jon" van Rood (7 April 1926 – 21 July 2017) was a Dutch immunologist. He founded Eurotransplant in 1967[1], a non-profit organization responsible for encouraging and coordinating organ transplants. He was born in Scheveningen, the Netherlands.

In 1977 van Rood was awarded the Robert Koch Prize [2]. In 1978, he was awarded the Wolf Prize in Medicine, jointly with George D. Snell and Jean Dausset. van Rood became member of the Royal Netherlands Academy of Arts and Sciences in 1978.[3]