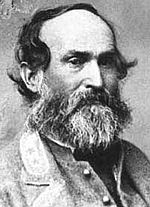 Jubal Anderson Early (November 3, 1816 – March 2, 1894) was a Confederate general in the American Civil War.[1] He commanded a corps in Robert E. Lee's Army of Northern Virginia.[2] He invaded the north in 1864. After the war, he was one of the major defenders of the Confederate.