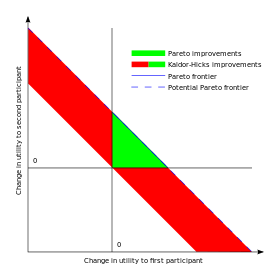 Kaldor–Hicks efficiency, named for Nicholas Kaldor and John Hicks, also known as Kaldor–Hicks criterion, is a measure of economic efficiency. It captures some of the intuitive appeal of Pareto efficiency, but has less stringent criteria. For this reason, it is applicable more often. Under Kaldor–Hicks efficiency, an outcome is considered more efficient if a Pareto optimal outcome can be reached by arranging sufficient compensation from those that are made better off to those that are made worse off so that all would end up no worse off than before.