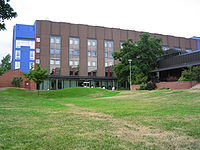 The University library and the Berzelius laboratory, KI Solna

It was started in 1810 on Kungsholmen island on the west side of Stockholm. It later moved to Solna, just outside Stockholm, and a second campus has been built in Flemingsberg/Huddinge, south of Stockholm.

A committee of the institute decides on the winners of the Nobel Prize in Physiology or Medicine.

Karolinska Institutet was started between 1810 and 1811 to teach army surgeons. It was called the 'Medico-Chirurgiska Institutet'.

In 1817 the name 'Karolinska' was added as a reference to 'Karoliner' which was the name of soldiers under the Swedish king Karl XII. The full name became 'Kongl. Carolinska Medico Chirurgiska Institutet'.

In 1968 this name was changed to 'Karolinska Institutet'.