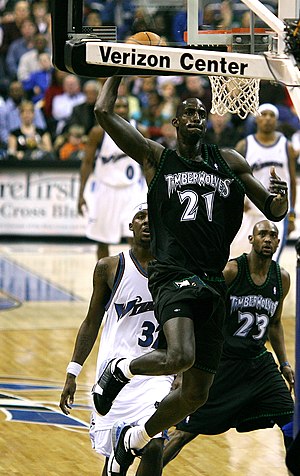 Kevin Maurice Garnett (born May 19, 1976), nicknamed "KG", is an American professional basketball power forward and center.[1] He plays for the Minnesota Timberwolves of the National Basketball Association (NBA). He has also played for the Boston Celtics and the Brooklyn Nets.

In high school, Garnett was a 1995 McDonald's All-American at Farragut Career Academy and won a national player of the year award. Garnett entered the 1995 NBA Draft, where he was selected with the 5th overall pick by the Minnesota Timberwolves. He was the first NBA player drafted directly out of high school in 20 years.

On February 19, 2015, He waived his no-trade clause and he was traded back to the Minnesota Timberwolves in exchange for Thaddeus Young.[2]