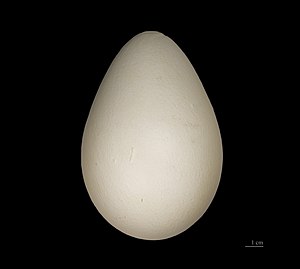 The King Penguin (Aptenodytes patagonicus) is a type of penguin. It is the second largest species of penguin, as it is smaller and shorter than the Emperor Penguin.

King Penguins are usually 70 centimeters (0.7 meters/30 inches) tall and weigh 9 to 15 kilograms (20 to 30 pounds). They have silvery-grey backs, black heads, and bright orange patches of feathers on the sides of their necks. While they look like Emperor Penguins, they are different in the fact that King Penguins have longer beaks, orange coloration on their chest, and are thinner than the Emperor Penguin. Males and females of the species look the same.

The King Penguin eats krill, small fish, squid, and plankton. In particular, they seem to enjoy eating lanternfish, which makes up most of their diet. They are able to dive to almost 300 meters (about 985 feet) for up to 15 minutes in order to catch their food. King Penguins can also swim at 10 kilometers (6 miles) per hour, and their special eyesight helps them see in the dark.

Unlike most penguins, the King Penguin cannot hop, but can only use its feet to walk or run. However, they also use their feet to warm their children, instead of a nest.

Baby King Penguins are dark brown and fluffy. They are usually raised in a crèche, or group of penguin children kept together for protection.

The King Penguin's main predators, or creatures that eat it, are the leopard seal and killer whale. Other birds may attack the penguin's breeding, or nesting, grounds and take away eggs or young penguin chicks.