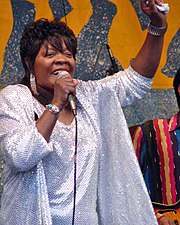 Koko Taylor sometimes spelled KoKo Taylor (September 28, 1928 – June 3, 2009) was an American Chicago blues singer, popularly known as the "Queen of the Blues." She was known primarily for her rough, powerful vocals and traditional blues stylings.

Help Improve This Page: Please contact us to become an approved KidzSearch editor and provide your credentials. Provide feedback on this article in our Koko Taylor Forum