Broeltowers in Kortrijk along the river Leie (Lys)

Kortrijk or Courtray (Courtrai in French) is a city in the Belgian province of West Flanders. The city is located along the river Leie (Lys). The centre is a well preserved historic area with a lot of shops and nice squares. The Beguinage (Begijnhof in Dutch) is a very well known historic part of the centre with well preserved medieval streets, houses, squares and alleys and was declared UNESCO World Heritage. 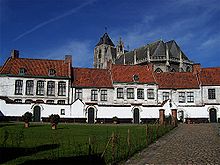