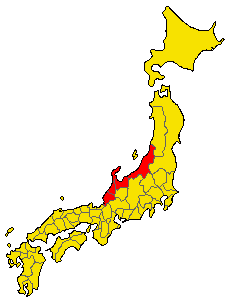 Koshi Province in the map of Japan

Koshi (越?) was a very old province of Japan [1] in the area of Niigata, Fukui and Toyama prefectures on the island of Honshū.

Koshi was also a regional name.[2] It was in what is now known as the Hokuriku region.

Koshi was divided into Echizen, Etchū, and Echigo provinces in the early 8th century.[3]