Langnau im Emmental ('Langnau in the Emmental') is a small village in the Emmental, in the canton of Bern. It is by the river Ilfis between the cities of Bern and Luzern. It has a population of about 8800 people. Most of the people of the village work in the building trades.

Langnau has an Ice hockey Club, called the SCL Tigers. They have their home stadium in Langnau. 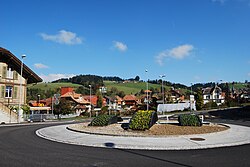