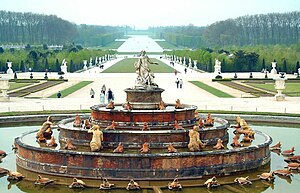 The Fountain of Latona (Fr: Bassin de Latone) is a fountain. It lies on the east-west alignment between the Palace of Versailles, the Apollo Fountain, the Green Carpet, and the Grand Canal. Latone faces west. The fountain was designed by Le Nôtre in 1666. The fountain figures were executed in lead by the Marsy brothers between 1668 and 1670. In 1686 Hardouin-Mansart altered the fountain. He had the figure of Latona (which originally faced the palace) turned 180 degrees. He also raised her pedestal.[1]

The fountain is designed in the wedding cake style. On the top tier, there is a statue of the goddess Latona. In addition to the goddess Latona are her young children, Apollo and Diana. The second and third tiers of the fountain have frogs. The lowest tier has turtles and alligators. Latona turned the Lycean peasants into frogs when they mocked her and refused to give her water in her flight from the jealous and angry Juno.[2]