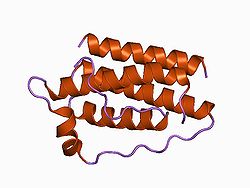 Structure of the obese protein
leptin-E100.[1]

Leptin is a hormone made by cells in fat tissue that reduces hunger. That helps the energy balance in the body.

Leptin is opposed by the actions of the hormone ghrelin, the "hunger hormone". Both hormones act on receptors in the hypothalamus. They adjust appetite to get energy homeostasis.[2]

In obesity, a decreased sensitivity to leptin occurs. This leads to a feeling of hunger, despite high energy stores.[3]

Although regulation of fat stores is the primary function of leptin, it also plays a role in other physiological processes. These additional functions are still being studied.

Leptin was recently discovered in 1994 by Jeffrey M. Friedman and colleagues at Rockefeller University. Its discovery is important in the study of obesity which has become a problem in western society. The importance of leptin was discovered through experiments done on mice in a laboratory. Scientists found that mice who had more leptin in their bodies were thinner and didn't need to eat as much. Leptin levels can be increased by reducing stress and having quality or restful sleep.