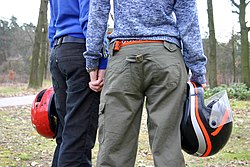 The word lesbian can mean a desire, a woman's identity, or activity between women. 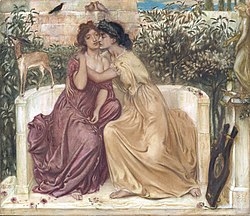 A lesbian is a homosexual woman. This means a woman who is sexually attracted to other women, and not to men.[1]

The word lesbian comes from Lesbos (Λέσβος), an island in Greece.[1] An ancient poet, Sappho, lived on Lesbos. Sappho wrote mostly poems about love. Many of her love poems are written to women. So her name and the island where she lived make people think about women who love women. Sometimes lesbians are also called Sapphists from the name Sappho.

Lesbians were involved in the early feminist (a movement of women who want to be treated equally to men) movement. Feminism is the political and social movements that promote women's equality and rights. However, there was conflict between lesbians and straight (heterosexual) women in the feminist movement. In the 1960s and 1970s some straight (women who like men) feminists wanted the lesbians out of the women's rights movement. They wanted feminism to be accepted by society. They believed lesbians were less accepted by society and might hurt the feminist movement.

Eventually, the women's rights movement accepted its lesbian members. Now many important feminist leaders are out (out means that they make it known that they are lesbians) lesbians.

Some lesbian couples also have their own biological children. To do this they may have artificial insemination. This is when sperm from a donor male is placed in a woman to make a pregnancy. Some lesbian women do this at home with a friend they choose to be the donor. However many may use sperm banks. These are medical businesses that match couples who need donor sperm with men who will donate. Sometimes this is done anonymously which means the couple does not know the donor. Sometimes this is done with the donor known and even chosen by the couple.

Lesbians can marry each other in blue countries. In red, orange, and yellow countries you can be punished for having lesbian sex

Unlike gay sex between males, lesbian sex is not against the law in as many places. Some religions that condemn gay male sex say nothing about lesbian sex. Abrahamic religions usually see gay as well as lesbian relations as immoral. Saint Paul in Epistle to the Romans 1:26 describes lesbianism as 'unnatural' and 'shameful'. There are some religions, however, mostly new religious movements that accept lesbian relations.

In most parts of the world lesbian couples cannot marry. This means they do not have the legal benefits and protection of marriage. This can cause lesbians, and gay men, many problems. A lesbian relationship wherein one of the partners is underage is called korephilia.[2]