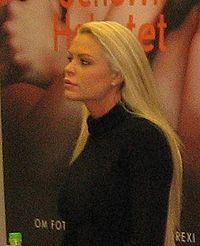 Linda Thelenius (born Linda Maria Elisabeth Gedin later Linda Rosing January 21, 1974 in Västerås, Sweden) is a model and was a participant in the 2003 edition of Big Brother in Sweden. In the Big Brother house, she and another participant, Micke, became involved in a relationship which was followed closely by the producers. During the show, she had sex on live TV, making her an instant tabloid celebrity.

Thelenius released her debut single, "Summer Love", in 2004. In 2006, she released her autobiography, Den nakna sanningen ("The naked truth"), written together with journalist and television host Daniel Nyhlén.

In the summer of 2006, Thelenius became the leader of a new political party, 'Unika Partiet', or 'The Unique Party'. This is a so-called non-registered party, meaning that there is no official record of the party. Thelenius was listed as the only candidate for the party, listed as an author on the party ballot. She received 222 votes out of more than 5.6 million votes cast in the election.

Thelenius is also famous for her many plastic surgery operations. She has breast implants, has had a facelift, and uses botox injections.